I have been exploring marginal parts of Glasgow since March 2014, making photographs as I go. I started by looking at some of the the open areas of waste ground between where I work and where I live. I was (re-)reading Edgelands by Paul Farley & Michael Symmons Roberts (1) at the time and was inspired to widen my compass and look at more of the types of locality visited in the book. Landfill, canals, bridges, woodlands, retail parks: Glasow is rich in such places. 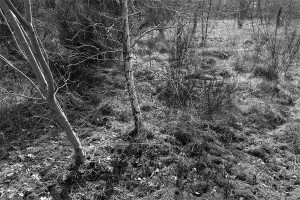 Edgelands is a term coined by the ecologist Marion Shoard in a 2002 essay of the same name (2). In her words, Edgelands are:

“…characterised by rubbish tips and warehouses, superstores and derelict industrial plant, office parks and gypsy encampments, allotments and fragmented farmland. All these elements are arranged in an unruly and apparently chaotic fashion against a background of unkempt wasteland. Huge numbers of people spend much of their time living, working or moving within or through it. Yet for most of us, most of the time, this mysterious no-man’s land passes unnoticed: in our imaginations, as opposed to our actual lives, they barely exist”.

As this project has progressed I have come to realise that I have been drawn to these marginal places for a long time. As a child I played, built camps and caught snakes, lizards and slow worms on the bit of Dorset heathland at the end of my road. It was all heather, pine woods and ponds – but tank tracks, deep trenches and concrete bunkers bore witness to some sort of military past. In the eighties I explored neglected reaches of the Thames estuary with large and medium format cameras, and more recently I have repeatedly photographed Blythswood, a small area of regenerating woodland just down the road in Renfrew.

All three authors took part in a 2011 BBC Radio 4 Open Country programme which is archived here.