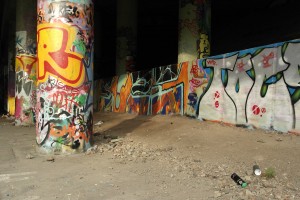 Going back a second time is sometimes disappointing. A couple of days ago I found what I have called the grafitti gallery. This afternoon I made the time to return, and found the place to be less atmospheric and the artwork a little less inspiring than on my first visit. Perhaps it was because today was fresher, brighter and less moody. Certainly the excitement of discovery has passed and now there was time to look at individual works rather than make more general first impressions. I’ll not edit my previous post, but my discription of the grafitti as being “of the most exquisite form” now seems to be an exageration. Some of it is interesting and skilfully executed but there is much that is more pedestrian. The colours are bright, however, and there is an awful lot of it.

Arriving by car, I had to park some distance away, which made me wonder how the artists carry all their equipment – cans, rollers, trays and ladders – to this place. I realise also that I know nothing of the grafitti art scene.

I did manage to explore a little further than last time:  the lack of paths through the birch woodland indicate that there is no way out at the far end. Next time I will probe all the edges of the space and see what can be found.