How does an idea emerge? It may be as simple as taking a walk through a vacant bit of land on a fine late-winter morning because you are early for work. From my diary: 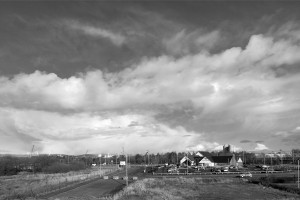 4th March 2014  “[Behind my work-place] there is a triangular-ish, five hectare-ish bit of ground which has a five or six metre mound of soil and rubble at one corner. Like most waste ground this place has no name so I’ll just call it ‘mound’. Anyway, yesterday was a blue sky and white fluffies sort of day and, with half an hour or so in hand before my shift started, an explore of mound seemed a good idea. I made a couple of interesting images: the first is from the top of the hump looking east, the second of the boggy grass? at the south end of the area. (My ignorance of sedges and grasses needs working-on.) I have printed these in black and white on torn sheets of cream cartridge paper. I’d love to see what they look like printed to A3 because the detail produced [by my new camera] seems to be approaching medium format. I have passed this place hundreds of times in the last few years – it is a short walk from the staff car park – yet I have not visited it in all that time. That’s how invisible these places are! “ 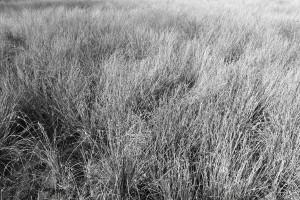 Just for the record, a few days later I brought home a stem of the ‘boggy grass’ and looked it up in the wonderful Collins Pocket Guide. It is Hard Rush, Juncus inflexus.

These photographs were the nucleus around which a new project began to condense. The two images are remarkably representitive of those produced subsequently. Namely ‘Scapes, with glorious Glasgow skies dominating the upper two thirds, and Details, almost abstract (and certainly abstracted) vignettes.