There is a photographic genre of Urban Landscape that highlights dereliction and decay. This is not my genre. I see “waste” ground as regenerating rather than decaying, unvisited rather than neglected. These places are getting on just fine without any interference from us and they are often closer to being truly wild than anywhere to be found in the countryside. There is great pleasure to be had in exploring these miniature wildernesses. My diary sometimes exposes my feelings: 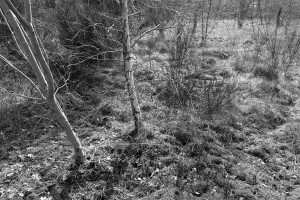 11 March 2014  “[The waste ground at Linthouse] is a quiet place. Just birdsong and some occaisional muted industrial banging clanging sounds from the nearby Govan shipyard. From a distance I had noticed that the bare winter trees display a curious red-and-green appearance. Close up I see that there is a mix of Birch – with warm rusty coloured twigs – and Sallow – with a rather greenish. Step well back and the two together combine into a dichroic effect which is visible to the eye but which seems to be quite elusive to the digital camera.

Beneath these young trees, Coltsfoot is in bloom, cadmium yellow stars which reflect the sun and warm the eye. Within the branches there is a silent gathering of Fieldfares, winter refugees from Scandinavia and a reminder that spring is not yet here. Not quite. The sunny weather does bring a Queen Wasp out of hibernation, warming herself on a length of rusting iron. By two o’clock I feel amost hot wearing just a polo shirt under an open winter jacket. 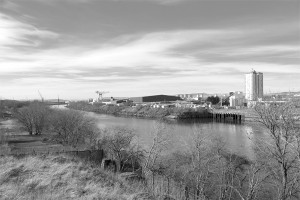 I spent a couple of hours moving around the area, pressing the shutter now and again. From this outing there are, I think, three print-worthy images. As I was leaving, I asked myself if I had been composing specifically for black and white. My immediate answer was ‘not consciously, no’, but, by the results, it seems that I was.”

A couple of days later the weather had become so gloomy you couldn’t see the Campsies.