At the beginning of the year I always get impatient for spring. February and March are the longest months. Earlier this year I was looking to make black and white images of waste ground. I was thinking about the project quite a lot but did not have it clearly sighted in my mind: 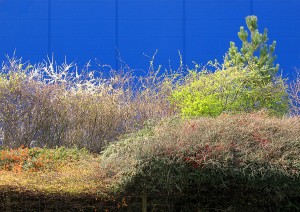 28 March 2014   “Leaving work this afternoon I just missed a bus, so I had a half hour to kill. I had a look around [the near-by scrubby patch that I call] mound. It was cloudy, it was cold and beside a few clumps of Coltsfoot and a tiny bit of Gorse, nothing there was in bloom and nothing had changed since my last visit. The light was uninspiring and all I really wanted was to get home and warm. Shivering back at the bus stop, the sun broke free for a few seconds and lit up the other side of the road – a glorious vision of nascent spring. I just had time to pull a compact camera out of my pocket and catch a single shot before the moment was lost.

As a ‘grab shot’, the image needed squaring-up and cropping a little but it is rather fine. It just shouts out the season: white blossom, fresh green bud-burst  and several shades of last autumn. All this against a familiar retail shed for a background, a kind of proxy sky. A good photo it may be, but where does it sit beside the other things I am doing? It is not wasteland and it is not black and white. Its impact is entirely down to colour and it could not be printed any other way. It is a singular image. It does not fit with anything else. 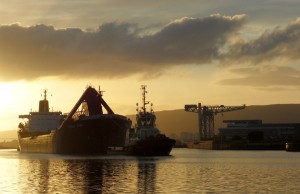 For now it will have to be filed under miscellaneous – together with last June’s ‘Bulk Carrier and Tug’ [which made The Herald’s Picture of the Day]. I could extend my project – or start another called Photographs Made at Bus Stops…“

Now that I think about it, I have quite a lot of singular images. Perhaps I should group them together? Photographs linked because what they have in common is that they have nothing at all in common.