Beside the M74, as it passes through Cambuslang to the south-west of Glasgow, there is a little hill overgrown with grass and scrub. The area was once part of Clydebridge Steel Works and is opposite the present-day Tata Steel building. I had seen it from a distance on many occasions and had it marked in my mind as a place to visit and photograph. Finding a way in was not straightforward, as the area is almost completely cut-off by the new motorway on one side and a loop of the river Clyde on the other three.

It is a seldom visited spot: the path to the top is not well troden and you have to hold bare arms high to avoid the thistles. The summit is perhaps thirty metres – a hundred feet – above the Clyde and from there you get a 360 degree panorama of much of Glasgow. My first visit, a few weeks ago, was on a fine day with a sky full of torn shreds of cloud. I sat on the top, looking about and eating my lunch, while silver whisps of thistledown blew around me in the breeze.

It is in the nature of edgeland places to be un-named and un-noticed, and this hill is a perfect example. I checked my maps and searched the internet but could find no reference to it. It does not even appear on the latest 2014 Ordnance Survey map (it should be delineated by at least two, if not three, ten-metre contours). A thirty metre prominence with no name and not even on the map – that’s a real edgeland.

A few days later, while making my way back to the car following a sunset visit to the hill, I met a couple out walking a rather bouncy pair of German Shepherds. We got talking and I asked…

“What’s the name of the hill over there?” 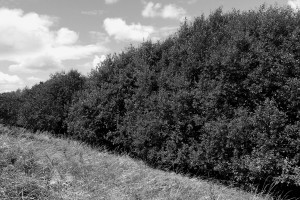 (Pointing) “The little one over there.”

“Something to do with the old steel works?”

“No – its where they dumped all the rubbish.”

“Yes, thats it, landfill. Its not a hill. Its a nothing.”